What is Pink the Towns?

This video explains what Pink the Towns is …
What its all about!

Paint the Town Pink was founded in the beautiful, small town of Dorchester, Ontario on September 21st, 2020 by a Stage 3 Breast Cancer patient Bec Matthews.  Bec was sitting in her backyard during a global pandemic, brainstorming how to raise awareness and funds to support Breast Cancer Research as she believed there may be a shortage of funds due to the pandemic.  It was at that moment that the ideas for Pink the Town really came to become more than just an idea.  The idea of showing support through lawn signs for the entire month of October began.

Bec quickly contacted her best friend Amie Vandevenne to request her assistance to make this idea a reality.  In a matter of two short days, a Facebook group titled “paint the town pink” was formed, and the campaign to raise awareness and funds for breast cancer research had begun.  It didn’t take long before people started joining the group and requesting information on how to order a Paint the Town Pink lawn sign!  The campaign was featured in the Signpost – Dorchester Ontario’s local newspaper as well as CTV news London.

Bec Matthews was able to quickly utilize a local printer who took care of the design and supply of the signs as the orders came in fast and furiously.  It was the first year of what was about to prove to be beyond her wildest expectations.  In a matter of two-week, Bec sold 1200 signs and time was running out for production and distribution; it was then that Bec realized that there was a desire to show support for the 1 in 8 women each year who will be diagnosed with breast cancer.

Paint the Town Pink had spread to many communities throughout Southwestern Ontario and even farther including Ottawa and Georgian Bay. Over the two-week time period, $ 13,380.00 was raised for breast cancer research and awareness.  Many businesses and residents of towns decorated their homes and front lawns with their signs, pink pumpkins, pink ribbons, pink porch lights and much more to show their support and raise awareness for breast cancer “the silent killer”.

This has now led to Pink the Towns. The campaign has proven to be widely supported by not only Dorchester, but towns across Ontario. In 2021, Paint the Town Pink became Pink the Towns, with a provincial campaign supporting breast cancer research and awareness.

Join our Facebook Group for Updates on Pink the Towns 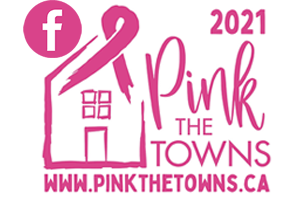